Jeannie sheds light on the origins of "Synthetic Puke"


" I am writing this time because in a couple of messages I noticed mention of "Synthetic Puke" and the "ETs". Synthetic Puke was born on a hot summer night on Oakland street, when Alice Royston, myself, Michel Dodge and Susan Schmidt all fought 24/7 in an efficiency apartment next door to the house where Rick Osbourn lived--waaay back when he was as short as I was and his voice was about seven-hundred octaves higher. It was hot as hell that night and the A/C was busted, so we had the windows open. Susan had her glossy red acoustic guitar on which she had written VAMPIRE LOVE along the bottom edge. Right there on the front she had tried to scrawl "PUSY FLESH", but misspelled it so that it instead screamed: "PUSSY FLEAS" in 4" black letters. Rick Osbourn (should I be trying to protect the guilty, here?) was on Sue's bongo drums, and I was on a guitar Mr. Jerome Bush had given me that sported a half-scratched-off sticker of the Tusken Raiders from Star Wars. Alice had a tambourine, and we were ready to rock.

In the apartment below, the wannabe sorority gals who weren't up to snuff and instead got stuck in the same complex with us were jammin' out to Phil Collins, and we didn't notice how quiet things had gotten until Susan paused in her singing--"Abortions, they can be fun...I love my little baby son-n..."--and we heard, from below, a female screech: "Are you weird, or what?" Well, naturally we were scandalized, nay, INSULTED by such a question, and immediately went into some good-natured (albeit frenzied)strumming, pounding and ad-libbing/shrieking that ended with "I hate kids and they hate meee". This led to war. We could not leave our clothing unwatched in the communal washer or dryer because the downstairs neighbors would take it out and throw it on the floor. (Have you seen the floors in those apartment complex laundry rooms?) So, we would wait until they had parties, and while they and their guests stood at the balcony railing, their arms from the elbow down the only things visible from our stance above, we would spit green jello or drop cigarette butts into the cups they held in their hands while they chitted and chatted below. (Yes, it even grosses ME out, now).

It wasn't until one of them actually started making threats of violence that Susan and I decided that enough was enough. We went into the kitchen where we dug through the back of the 'fridge and located items that had been there so long that the ink comprising the date-stamps on the containers had even begun to mold. Alice was notorious for leaving half-eaten yogurts in there, and these, when mixed with oatmeal, fermented bean soup, rotten milk and a touch of ammonia made for a really hellish, chunky, putrid concoction that stuck nicely to the vehicles belonging to our neighbors and their guests. Oh yeah...did I mention our lease was nearly up and we would be moving out soon, anyway? Even before the death-threats started coming from the complex management? Alas, that was where "Synthetic Puke" came from--at least by that name at that juncture. Every time anyone pissed us off we would remark from the sides of our mouths that it might be time to "hurl up a batch of synthetic puke". I noticed afterward that Alice would often mutter the same whenever it was time to clean out the refrigerator...I sincerely hope no one reading this was ever parked nearby at these times.

As for the "ETs" (If you're reading this, JB, remember standing in the living room on Summit and suggesting we call ourselves THE DADS? AAAAAACK) the band was just-for-fun and quite possibly a shared-hallucination...maybe we all drank from the same cup and just imagined the whole thing? Nah, really, it was Matt Royston, JB, Scotty and me. I had a bunch of silly songs that we added bass, drums (etc...) to, and played at a party on Felch street one night when about a hundred people were on 'ludes or Labatts or both. Even better than the actual band, though, were the practices upstairs on Summit. Wes let us borrow his FLYING V one time, and Jerry almost went on strike because every time he got close, the strings (which Wes had not cut the excess from) would shock the crap out of him. So Greg went and got a tool (probably from his trunk) and trimmed the strings off. Then WES had a fit because, well, isn't it obvious? They were HIS strings, goddamnit, and he wanted them long, and no one had any right, and where was the respect for other people's property, and what was the fuckin' world comin' to anyway, and--and--and" ---Jeannie Norton 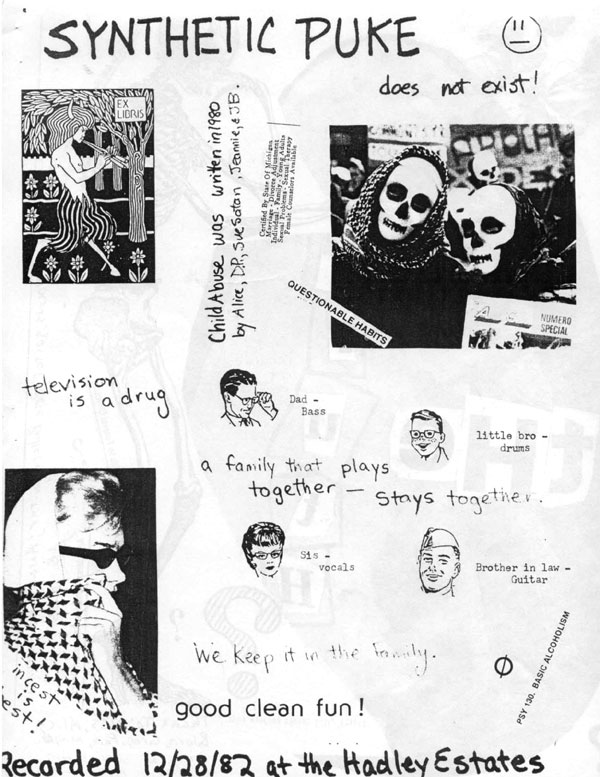