Its the late 60's and like most kids in my neighborhood we all kinda did whatever was trendy at the time. Well.. skateboards were starting to be popular but it was hard to find anything ready made. We ended up having to make our boards. We took roller skate trucks/wheels and fastened them to a small board. No grip tape. Typical scene that was replayed over and over again around the country.

We even had a small ramp. In my parents driveway. It wasn't fancy. As I recall it was nothing more then a sheet of plywood leaning against some bricks to form an inclined "bank". I'm not sure we knew what we were doing with it. I mean, we just copied what we saw in "skateboarder" magazine. Kickturns were about all we could do then. I do remember using it like a "launch ramp" also.. That was kinda rad considering the skateboards we rode. This was of course years before the term "launch ramp" was even coined. I also remember us setting up pop cans like slalom cones. We would take a few kicks and try our best to weave between all the cans without knocking them down. Oh yea.. and the "can jump". We would set up a line of cans, place a board at one end then take another board and ride up to the cans, jump over the cans and land on that waiting skateboard. I remember being the "king" because I could jump over 15 coffee cans. I was about 12 years old at the time. 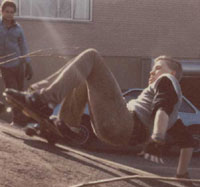 A few years later, skateboarding started to hit the commercial market. You could now go to a store and actually buy an assembled setup! My first "store bought" skateboard was a fancy fiberglass job with urethane wheels. Those wheels were sweet compared to the clay wheels we had been using! You could go WAY faster.. take more chances. No fear of sliding out in a fast corner carve. Jeff and I even built a somewhat *real* 1/4 pipe ramp then. That ramp ended up being stored behind my parents garage but would be resurrected a couple of years later. It wasn't long after that that I pretty much stopped skating. Other things had my interest and skating just kinda faded away for me. 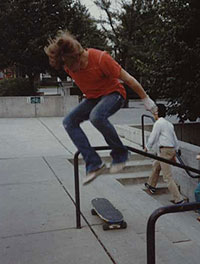 Around the end of 1981 I met what would be my first hardcore skate bro, Tommy Hartwell. Tommy was a total punk. He didnt wear all the current punk rock fashions that were popular at that time. No .. Tommy was a true punk, on the inside. Tommy had issues. He pretty much didnt care what anyone thought about him and acted accordingly. He had a skateboard with him 24 hours 7 days a week. At first he rode Santa Cruz boards but later switched to Dogtown. Tommy skated mostly streets and had a very aggessive style. He mixed 70's freestyle moves up with slides, berts, shit like that. Tommy and I skated a LOT together. We rode all over town. Hit all the parties, got into mischief, went to shows/gigs. There were times when we would spend days together.

Many evenings spent "sessioning" uptown ended with me and Tommy and maybe Lee Jackson or Adam Graham hanging out partying or sleeping in Liberty Plaza. I remember the day that Lee took his belt off and wrapped it around his board and came flying down Liberty only to swerve, at the last second, onto the sidewalk and JUMP down the stairs at the Plaza. Now with today's skaters with their ollie magic, that might not seem like much. Lee did it on a 6" wide board and back then.. it was just MIND BLOWING. It was these guys who would give me my first reality check and help me develop a proper "skate ethic". 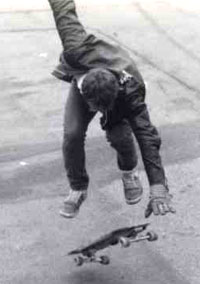 The first wide board I had was a Sims "Bert LaMar" and it had ALL the plastic bullshit accessories on it. Copers, rails, nose guard, tail guard. I bought the board from this small skate shop on Main St that was above "Lovin Spoonful". I remember not paying rent that month and instead getting this new deck (priorities). I was so proud and excited to have it.. I immediately skated around looking for my buddies to show it off to. I found the crew sessioning the "pro building" and first thing Adam says to me is "Damn.. look at that flashy piece-o-wood with all the plastics doodads on it!". I was shocked! .. he were putting my board down!. Adam would go on and on about "All you need is a piece of wood and some wheels/trucks. Forget about all the fancy paint and brand names". He was a purist.It was all "wood" to him. In time, I came to understand EXACTLY what he meant by that. Oh.. and the "Bert Lamar"? ..I broke it a month later doing a "pressure drop" off a garbage can in the 'Plaza. 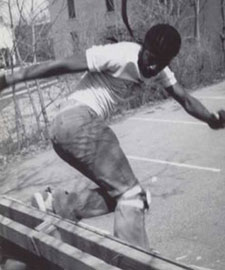 The first time I met Lee Jackson was at Liberty Plaza. Liberty Plaza was a way cool skate/hang spot back before all the lame anti-skateboarding laws in this town took effect. Lee was pure street. He lived on the street and knew every crack in the sidewalk. Lee rode an old Alva board.. one of the first ones to come out. He had that board for many years and it was with him where ever he went. ANYTIME you felt like street skating, just head uptown. You could count on running into Lee within a few minutes. Smoke a joint, go do some slalom down Liberty. Ride over and hit Broadway Hill. Didnt matter where we were at. Lee skated very hectic and inspired everyone around him. I dont know what ever happened to Lee. I have no clue if he is even still alive.

I worked midnights at this restaurant called "The Pantree". It was located right next to Liberty Plaza up on the second floor. At that time, the Pantree was the only 24 hour restaurant in downtown. Fleetwood wasn't 24/7 back then. Having easy access to food meant that none of us ever went hungry. It was not uncommon to have skaters wait by the back door so that I could hand food supplies out to them. The Pantree became the place to "escape" the street for a few minutes. Later on, the Pantree would serve an odd role in our early hardcore scene. 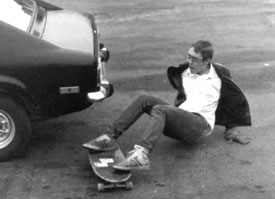 So yea, we were street rats. Lived and breathed the street life. "The Cube", Liberty Plaza, the "Shuttle landing", "Pro building", "SSR banks", "Jack banks", "The Ditch" and ALL parking structures. We knew where all the cracks in the sidewalk were or so it seemed. High speed slides both laybacks and 360s, curb grinds, mail box leaps, wheelies down Liberty. Another thing we got into was "down hillin'". While Broadway Hill was the longest downhill in the area it would be the neighborhoods off Miller Rd that really taught us how to slide and control speed. That area, just west of downtown, provided MANY cool hills. Brooks was the best. Smooth, FAST pavement, quick burst of speed in the beginning then taper to a nice long runoff. 20'-30' layback slides at the bottom, before you hit Miller Rd. were the norm.. and the only way to stop. Summit, Spring, Fountain...there are others. Pretty much all those roads were cool to shoot. Fast as you can imagine, tears streaming from both eyes. Tucked up trying to be as streamlined as possible. Falling off your board translated to weeks of "sticking to the sheets". Road RASH my friends, SERIOUS road rash. Riding those hills was one of the best "rushes" I ever had on a skateboard.

While its true we were street skaters...it wouldn't be long before a new skate rush would take us over.